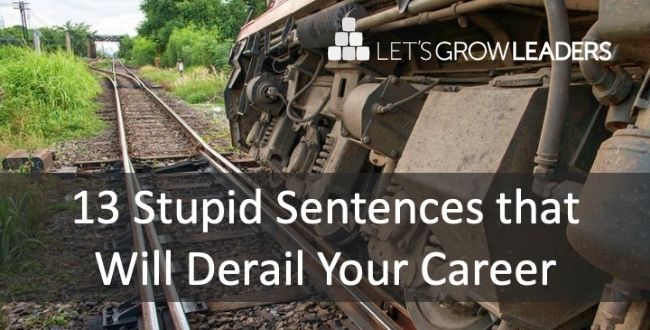 13 Stupid Sentences That Will Derail Your Career

I wish HR would teach a course on the really stupid sentences people say at work. Oh, I’m not talking about the obvious stupidity: “you look hot in that dress” or “hey baby”. There are training and rules for that. But there’s no code of conduct to protect against the stupid, dis-empowering words I often hear up, down and sideways.

1. That’s Not My Job (#1 by a landslide) – Although we all know this, someone is still out there saying it.  Instead, help all you can.

2. That Decision’s Above My Pay Grade – The really wacky part of this one, is that I hear it most often at the higher levels of the business. Please, please don’t say this. And whatever you do, don’t say it to someone at a lower pay grade than you. They count on you to advocate for what’s right, not shrug your shoulders and rollover.

3. I Wasn’t Aware – This one is commonly used to throw someone else under the bus. Trust me, you look like an idiot. “Let me find out more”, “I’m digging in”, and “I’m here to help” are all acceptable replacement statements.

4. My Team really Screwed This Up – No one really says this do they? From my experience and the poll, yes. Sometimes out loud; sometimes by just being silent. Own your team’s mistakes and help them fix them and learn. There’s no better way to gain credibility up and down the chain.

5. I Can Always Get Another Job At Twice The Pay Some Place Else – Okay, if that’s really true, and you’re disgruntled with the rest of the scene to say that out loud, maybe you really should go find another job.  But if you’re just blowing smoke,  be careful.

6. I Just Don’t Have Enough Time To Do That – If it’s not a priority say that. If it’s important than it’s time to ask some “how can we” questions.

8. That’s A Stupid Question – As much as I want to throw up every time someone says there are no stupid questions, the truth is leaders keep saying that because other leaders are out there making people feel stupid.

9. What’s Wrong With Them – If your team’s not performing, the problem starts with you, not them. It could be selection, systems, rules, leadership. Figure it out, reverse the direction of your finger-pointing.

10. That’ll Never Work – If I had a nickel for every time my team proved me wrong or I proved someone wrong, the truth is that just because it didn’t work in the past doesn’t mean it won’t work now. Put away old biases and really listen. Consider a pilot or some other form of toe-dipping. Most importantly, be a receptive and encouraging leader.

11. That’s The Way We’ve Always Done It –  In our Courageous Cultures research, we’ve found that 67% of employees believe that managers operate under the notion of “this is the way we’ve always done it.”  Such thinking squashes creativity and encourages FOSU (fear of speaking up).

12. The Employees Need To Realize They Are Lucky To Have Jobs In This Economy – Okay, so grateful (and without choices) that they _____________. I know you’re not saying these things, but research has shown many someones are.

If you’ve stumbled on this article you’ve found one of the early ones. I have some updated thinking in an article I wrote for Fast Company: 10 Common Excuses that Silently Damage Manager’s Careers

If you’re looking for more career tools, you might enjoy some of these.

Avoid These Infuriating Phrases in End of Year Feedback

7 Questions to Ask Yourself to Become a Better Leader