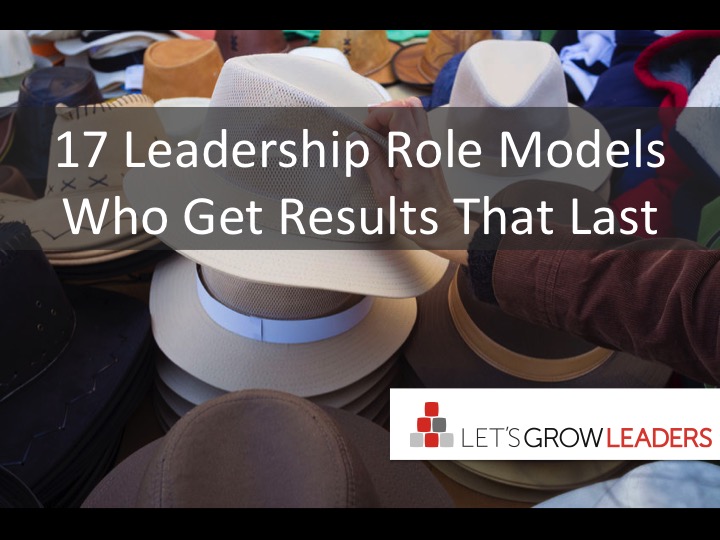 Leadership Role Models Who Get Results That Last

Who are your favorite leadership role models? And who will think of you as THEIR role model? And why?

In this article, I share an approach to becoming your own leadership role model–both for yourself and others. And, tap into the wisdom of leadership thinkers and writers who share who theirs is and why.

Leadership Role Models: Be the Leader You Want Your Boss to Be

If you’ve met us, you know one of our leadership-development recommendations for human-centered leaders is to be the leader you want your boss to be.

Because you just don’t know what you’re going to show up to tomorrow.

But you do have a very important choice: How you show up.

One of the best ways to become a better leader is to DECIDE how you want to show up.

Regardless of what happens next.

To lead from your own playbook. To be your own leadership role model.

Becoming your Own Leadership Role Model

When we work with leaders in our leadership development programs one important activity is to build your own leadership playbook. You can read more about how to do that here.

See Also: How to Find the Perfect Mentor

An Interview with One of Karin’s Favorite Leadership Role Models

“We need role models who are going to break the mold.” -Carly Simon

In the early stages of the Let’s Grow Leaders blog (2015), I asked other leadership writers to consider my “7 Results That Last” roles, and identify leadership role models who exemplified the values and behaviors inherent in that role. Their thoughtful answers are below.

Or perhaps more unsung hereos as described in Time’s list of 2020 Heroes?

David Dye suggests Nelson Mandela as a great leadership role model.  He didn’t just work for peace, he articulated why forgiveness was vital and how specific activities, like supporting the national rugby team, made a difference. Follow David.

Paula Kiger of Perspicacity suggests the post-presidency Jimmy Carter among the great leadership role models for a connector. He has worked with so many different nationalities and causes, connecting all along the way. Follow Paula.

“Unless both sides win, no agreement can be permanent.” -Jimmy Carter

Wally Bock of Three Star Leadership suggests A. G Lafley, CEO of Proctor and Gamble. His career is marked by consistently helping individuals and teams and his company do better.  Follow Wally.

Lisa Hamaker of How Good Can You Stand It? suggests Albert Einstein. He is mostly known as a genius in mathematics and physics, however he also knew that spirituality entered greatly into his work, “I want to know God’s thoughts, the rest are details.” Einstein also understood that the value of intrinsic motivation far outweighs the extrinsic, “Everything that is really great and inspiring is created by the individual who can labor in freedom.” Follow Lisa.

John Hunter of Curious Cat Management Improvement  suggests the late W. Edwards Deming, engineer and management consultant.  “He clearly articulated the importance of building a management system that was effective and continually improving.  This is the theme of my book, Management Matters: Building Enterprise Capability. – Follow John.

Dr. Artika Tyner of the Planting People. Growing Justice Institute suggests Charles Hamilton Houston. Social engineering was developed in response to racial inequities in the justice system. Civil rights pioneer, the late Charles Hamilton Houston, developed this theory due to his lifelong commitment to burying the remnants of racism. Houston characterized a social engineer as the mouthpiece of the weak and a sentinel guarding against wrong. Follow Artika.

Matt McWilliams of Matt McWilliams Consulting suggests Mike Krzyzewski – “As much as I can’t stand Duke (my dad went to Wake Forest), I respect Coach K because he always, always, always instills BELIEF in his team. He helps them taste the win long before they’ve experienced it.” Follow Matt.

“Imagination has a great deal to do with winning.” -Mike Kryzewski

Lisa Kohn from Thoughtful Leaders Blog suggests Nelson Mandela, the first black democratically elected President of South Africa and the leader and face of the Anti-Apartheid movement.  He fought against racial discrimination and for his actions, he served a twenty-seven year prison sentence. Showing his determination, focus, and will power after he got out of prison, he worked again for what was right. Follow Lisa.

Chantal Bechervaise of Take It Personel-ly  shares, “A well-known leader that comes to mind is also one of my favorite authors too, Mark Miller. I feel that he exemplifies servant leadership and after reading the 7 roles, I think he is a great match for all of them.”  Follow Chantal.

“When you expect the best from people, you will often see more in them than they see in themselves. The good news is that people generally rise to the level of expectations placed on them.” -Mark Miller

Beth Beutler of H.O.P.E. Unlimited suggests the Biblical leader, Nehemiah, is a great example of all the roles but fits well as an ambassador. He had to travel back to his home country to spearhead the rebuilding effort while guiding the team to protect the borders from enemies as they rebuilt. Follow Beth.

Michelle Cubas, CPCC, ACC, of Positive Potentials, LLC . suggests three leaders that have dared to stand on the edge of conventional behavior and thinking. Daniel Pink is a current trend disrupter and contrarian who fits this description. Jim Collins has a place in this segment, too. Terrie St. Marie (Starbucker) who has written a post describing the difference between a boss and a leader. Follow Michelle.

“If I’d had some set idea of a finish line, don’t you think I would have crossed it years ago?” Bill Gates

Blogger David Oddis has the privilege of knowing a few accelerators. Names that come to mind are Brandon Jackson, Sean Poris and Mark Portofe. These gentlemen do what great leaders do. They will without a second thought put themselves in front of the bus if needed. And, the jump in and work side by side with staff to meet goals, encouraging and lifting spirits. They are not status takers or neck breakers, they are leaders and these are the type of people I want on my projects. They get it! Follow David.

William Steiner of Executive Coaching Concepts suggests Jack Welch of GE, famous for his WORK OUT team methodology which brought people from all levels in business together to take a fresh look at all business processes and reinvigorate the whole approach.  Follow William.

More Ways to Become Your Own Leadership Role Model

Winning Well: A Manager’s Guide to Getting Results-Without Losing Your Soul