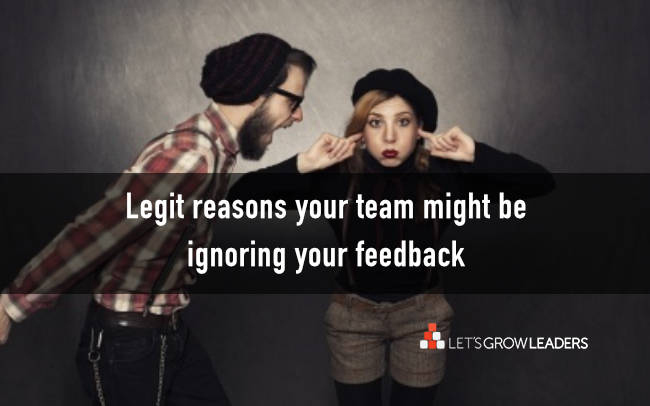 7 Reasons Your Feedback is Being Ignored

Start with yourself to ensure everyone can receive feedback

It’s a frustration we hear all the time. “My people aren’t coachable. They’re defensive. It’s like they have a wall and just won’t listen.” We get it. One of the most frustrating human experiences is feeling ignored or unheard. And sometimes people who can’t grow aren’t in the right position. But… there are also legitimate reasons your people ignore feedback. Eliminate these roadblocks to build teams where everyone grows together.

7 Reasons Your Feedback Is Ignored

Let’s listen to team members explain why they have a hard time hearing or acting on the feedback you might share.

“I’m trying to do better, I really am. But it’s all just too much. Every time we meet, he’s giving me something else to work on. No matter what I do, I can’t seem to get it right, so I’ve learned to just block him out and do the best I can.”

Solution: Make change manageable. Focus on one behavior at a time.

“My boss has talked with me three times about my communication. The other day I tried to give her some feedback about how her communication style was landing with my team. She didn’t want to hear it. Why should I listen to her if she won’t listen to anyone else?”

Solution: Listen. Reflect to connect. You don’t have to agree with everything you hear, but if you want people to hear your feedback, you’ve got to hear theirs. Role model what it looks like to be coachable and receive feedback in a healthy way.

“My boss keeps telling me my customer courtesy credits are too high — that I’m costing the business too much money. So I really worked on that for a while. But then, I found my customers asked to speak to my supervisor. And guess, what? She always gave them the credit! She looks like the hero, and the credit she gives them goes against my numbers and I still end up on progressive action.”

Solution: Follow your own standards. If there are reasons you make exceptions, clearly differentiate and explain the thought process, so your team can do the same.

“My manager says I need to be more strategic. That sounds awesome. I’m all for that. But what does that mean? How do I do that? I think I’m doing my job, but then am told I’m not strategic enough.”

Solution: Be sure your feedback is specific and actionable. Explain what success looks like in terms of specific observable behaviors.

“My supervisor keeps asking me to do this, but I just don’t think it’s right. It’s going to have a negative impact on MY customers. I’ve tried to explain my concerns, but she just keeps citing policy, and that this decision is ‘above my pay grade.'”

Solution: We all have to implement policies we may not agree with. Listen to the concerns. Once you’ve summarized what you’ve heard, then you can explain why the decision happened. Just shutting down the conversation may lead to compliance, but not always. And it certainly won’t lead to commitment. Sometimes a straightforward “I understand that you disagree – and I’m not asking you to agree. I’m asking if you can do it?” will get things moving.

“My boss told me this process should only take thirty minutes. That’s true, but that doesn’t include the prep time, answering questions, and follow-up to ensure the process sticks. Her thirty minutes is actually two hours.”

Solution: Make sure you have your facts straight and be open to changing your mind when the data doesn’t match your initial assessment.

7. I Don’t Know What You’re Talking About

“I had the most frustrating conversation with my boss. He told me I needed to do three things. As far as I know, I am doing all three of those things. I explained how I was doing what he was asking and he got frustrated with me. He told me not to be defensive and that those three things aren’t really what he’s talking about. It’s like he was talking around whatever it was he wanted to say. I wasn’t defensive before, but I’m getting there.”

Solution: Speak directly and avoid generalities. Describe what success looks like with specific behaviors or outcomes. If there is a challenging issue, address it directly and then offer specific objective examples of the issue.

A healthy feedback discussion is a conversation. It opens the door to communication and mutual understanding. Honing your skills and modeling receptivity will help you build a culture where everyone on your team or in your organization can speak up.

Most employees want to do a good job. If your feedback is being ignored, dig deeper to get to the root cause.

We’d love to hear from you. When feedback seems to fall on deaf ears, what else might prevent the conversation and team from moving forward?

Here are some more resources to help you have effective performance conversations: 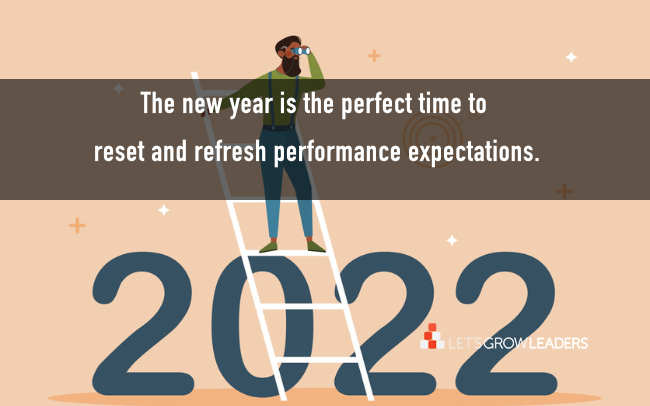 How to Reset Performance Expectations for Better Results

How to Reset Performance Expectations for Better Results

The start of the year is the perfect time to reset and refresh performance expectations. Outstanding performance starts with clear performance...

By Karin Hurt and David DyeCommunication 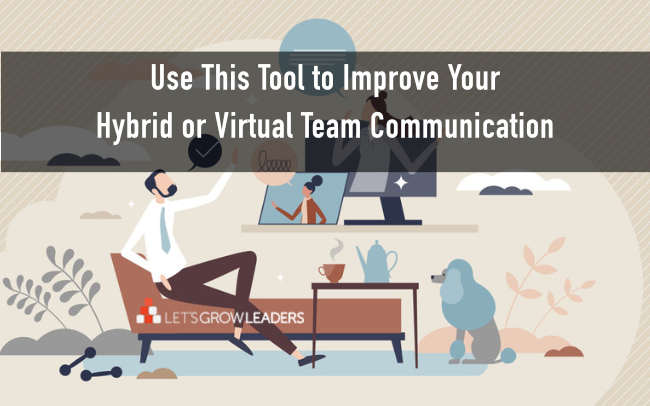 How to Improve Your Hybrid or Virtual Team Communication

How to Improve Your Hybrid or Virtual Team Communication

The Best Hybrid and Virtual Teams Communicate About How they Communicate As we shared in 6 habits of highly effective hybrid and virtual teams,... 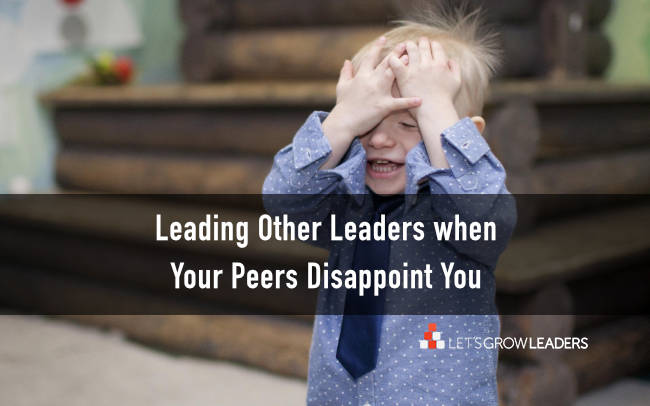 Take the initiative with confidence and humility to lead other leaders This question came in from a member of the Let’s Grow Leaders community...